Aquaponics is a combination of fish farming (aquaculture) and the growing of plants in the nutrient solution (hydroponics). Aquaponics is a recirculating system in which fish are reared in a fish tank. The fish waste which the ammonia is converted into nitrates by the bacteria and become nutrients for the plant roots to absorb. The plant roots will filter the water before it returns to the fish tank for another cycle. (1)

These are the different types of aquaponics systems:

The media based system is the most common type of Aquaponics system. This system is also called Flood and Drain.  In this system, plants are grown in a planting media like gravel or expanded clay pebbles. The planting media filters the ammonia-based waste and solid waste. The media based system is well suited for growing smaller and larger fruiting plants. This system is also popular with do-it-yourselves, backyard aquaponics systems, and commercial farms. (2)

The media based system is best used for beginners and backyard aquaponics gardeners because it is easy to set up, inexpensive, and productive at a small scale. Because the growing media can support the plants very well, you can plant large root mass plants such as fruits, flowering plants, vegetables, and root vegetables.

The Nutrient Film Technique (NFT) in Aquaponics is a method in which the plants are grown in a long narrow channel. NFT is a hydroponic growing technique that is adapted to aquaponics because of its simple yet effective design and works well in some environments.

In NFT, a thin film of water flows continuously down each channel, providing the plant roots with water, nutrients, and oxygen. When the water reaches the end of the channel, it is pumped back to the fish tank. (3)

Similar to the raft system and media-based system, NFT uses both water and pump to deliver nutrients to the plants. This system requires a separate filter to clear the water of solid and biological waste before it’s returned to the fish tank.

Nutrient Film Technique systems are primarily used in cultivating greens that have small roots systems. NFT is commonly used in the commercial aquaponic system but can also a hobby system as long as the water is filtered before it is used in the NFT channel

NFT is popular in commercial aquaponics because of its space efficiency and lower cost of labor. Plants are easily accessible and harvestable in this system because they are grown in vertical pipes. This system is best for leafy greens and not suited for large fruiting plants as their roots may clog the channel. The plant roots are more exposed in more air and less water in the NFT system, which can lead the plants vulnerable to heat and cold fluctuations.

The beneficial bacteria primarily live in your bio-filter or media beds but also in the raft tank and throughout the system benefiting the plants. Plants grow quickly in a raft system and can be an easy aquaponics system for the beginner aquaponics gardener to set up and maintain.

The raft system is common with commercial production.  Many commercial aquaponics farms use this system because they allow the plants to grow faster and yield more crops. The Raft system is best suited for mass production of certain types of vegetables like leafy greens. 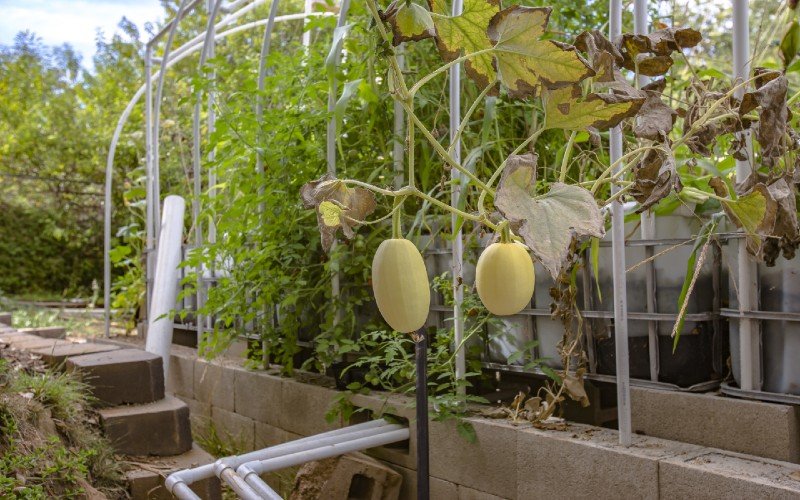 The constant height one pump (CHOP) is sometimes called “constant height in the fish tank” (CHIFT) or a “pump in a sump tank” (PIST). This system comprises a CHOP, fish tank, sump tank, and grow beds with grow media. The pump is used to pull the water from the sump tank into the fish tank, which drains into the grow bed where plants live, each grow bed has a bell siphon. (4)

Most beginners, hobbyists do-it-yourselves, and backyard aquaponics gardeners use the CHOP system of aquaponics because this is the most efficient way to run an aquaponics system. The chop system is also easy to set up and easy to maintain. This system can support small and larger plants because it uses grow media to give support to the roots.

A hybrid aquaponics system is a combination of multiple types of an aquaponics system. Most commercial aquaponics uses a hybrid system because if its efficiency and great use of space. You can combine any system that you like and fits your needs. There are several approaches to this aquaponic system and all can work well, depending on how you design, build, and maintain your system. (4)

Here are the most common hybrid approaches:

The hybrid system is used mostly in commercial aquaponics and home aquaponics that wants high productivity in a small space.

What type of aquaponics system is suited to you?

Aquaponics can be simple or complicated; it depends on how you want your system to be. Educating yourself first to the pros and cons of the different aquaponics systems is important in creating a system design that is perfect for your aquaponic gardening needs and wants. Join our Facebook community for more updates about aquaponics.